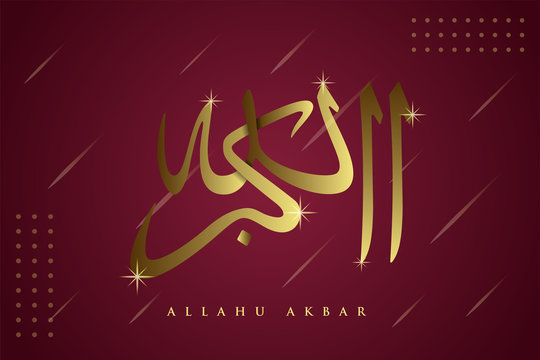 Yeah! Unfortunately, people think this is what Muslims say before they blow themselves up. These words are much, much greater (literally) than these stereotypes. These words translate to: Allah is greater.

Now, when someone does Jihad (battles in the way of Allah), he does not do it for money, nor pride, nor revenge, not even for his own self; he does it for something even greater than all that. That is why a Muslim shouts: “Allah is greater” when entering the battlefield; to remind himself, that his actions are not for his own self, but for the greatness of Allah.

Now, the greatness of Allah is not only proclaimed on the battlefield, it is to be proclaimed all the time; every day. Our call to prayer starts with it, each prayer starts with it, millions of Muslim say it day in and day out during pilgrimage just as Muslims around the world do so during the first half of the holy month of Dhul-Hijja (month of Pilgrimage). And it is especially proclaimed during our celebrations of Eid.

This call is something that brings people together, assembles, unites them. Under one common banner, all proclaim the greatness of Allah.

So why do we mention all this, because some things can only be said about Allah…

And say, “Praise to Allah, who has not taken a son and has had no partner in [His] dominion and has no [need of a] protector out of weakness; and glorify Him with [great] glorification.”

And Allahu-Akbar is one of them.